Kubernetes provides us with advanced deployment tooling out of the box, so the main challenge with implementing canary releases lies not in deployment per se. It’s much more about defining the criteria of canary health and acting upon it.

The flow here can be as complex or as simple as your specific environment requires. The number and type of required verification points, manual or automated approval processes, etc. For the sake of our example we’ve defined the following, fully automated flow: 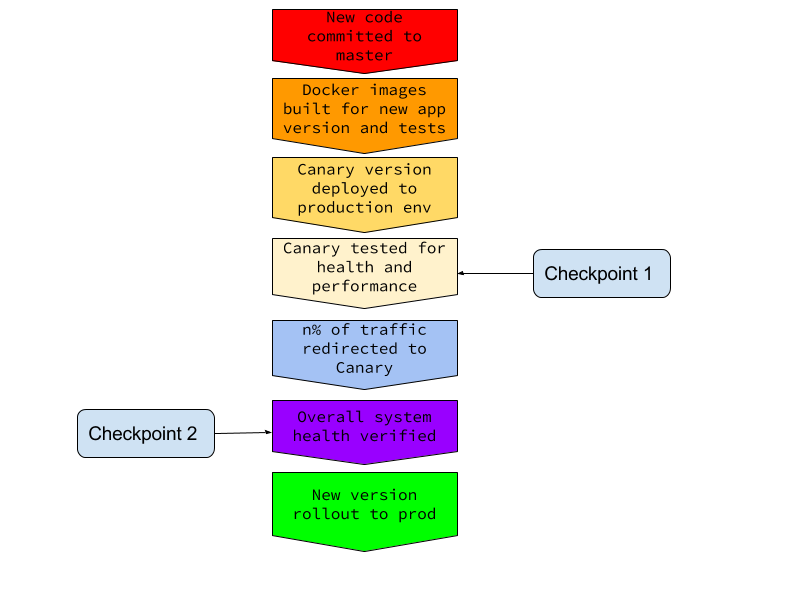 Application code should reside in the file named api.py. This is what gets packaged inside the app Docker image. There are 2 dockerfiles in our repo: one named Dockerfile that is used to package and execute the application code and the other one named Dockerfile.test used to package and execute the tests. This is needed because we will run all of our tests inside the K8s cluster and we will use Docker to send them there.

Our goal in this example is to implement the trunk-based development and delivery pattern. We will do this by associating 2 Codefresh pipelines with the same github repository. Both watching the master branch.

First pipeline is the canary. It gets triggered by a Github webhook for each new master commit and is configured to use codefresh-canary.yml as its flow definition.

We first build and push the images for the application and for test execution. Steps appropriately named buildAppImage, pushAppImage, buildTestImage and pushTestImage take care of that:

The step deployToK8s then uses the K8s deployment definition residing in orni-dep-canary.yml to deploy our new version to the production cluster.

In testCanary we run an end-to-end integration test on the canary in order the verify its health.

If the test fails - we rollback the canary release in rollbackCanary

If all goes well - we proceed to verifyCanaryInProd where we open 10% of production traffic to the canary instance and verify that some of the traffic indeed gets served by it.

Once that is completed - we call triggerProdDeployment which executes Codefresh CLI to run our second pipeline.

We are using 2 K8s declarative definition YAML files: one for the production instances and another one for the canary. The production one is called orni-dep.yaml and declares 2 K8s resources:

Note the container spec of the deployment object:

The image tag BUILD_NUMBER is not an actual tag but a placeholder which gets replaced inside our Codefresh pipeline with the actual tag of the newly built image:

(This could be of course better implemented using a Helm chart, but I’ve decided to keep this example simpler and not add Helm into the mix.)

You will also notice that the deployment strategy for production pods is set to RollingUpdate, which means that once we are satisfied with the canary and ready to upgrade them - they are replaced in a zero-downtime, ramped manner.

A cluster-visible ClusterIp type service named ‘ornithology-canary’ That exposes pods based on type=canary label
A deployment, also named ‘ornithology-canary’ That creates 1 replica of our application pod with the matching type=canary label. This allows us to roll out the canary to the same cluster and namespace as the production but initially invisible to clients talking to the production version.

As we already said - the real challenge with canary is building the quality gate that defines when and if the new version satisfies all the requirements and can incrementally be exposed to more production users.

This gate could of course be purely manual. I.e - deploy the canary version, let it run for a while, analyze its logs and metrics to see if everything is working fine and then release to production. But manual techniques are slow, unreliable and scale really-really bad. So for a real canary islands paradise you need some automated solution that will approve your application health and send it to production when everything looks sunny.

In a real-world environment you’ll want such a solution to integrate with your observability platform. In fact - our example application is already instrumented to output metrics that can be scraped by Prometheus. But here again - for the sake of simplicity I decided no to look into reading and programmatically analyzing Prometheus metrics. Instead we will be running some shell scripts to verify that application provides responses with acceptable latency and to test basic functionality.

As we already discussed - the canary is first exposed only to the K8S cluster via the ornithology-canary NodePort type service. This is done by matching pod label type=canary to the corresponding service selector. Once the service is up - we can test application health by sending requests only to the canary pod(s). As the service is not available outside of the cluster - we’ll need to run the tests inside our cluster and namespace. Here is the step that does exactly that in codefresh.yml:

We are using the test image we built earlier and running it in the cluster as a one-shot job using –attach=true to get the job exit code back into Codefresh. If the test script fails it will exit with non-zero exit code, which will also fail the pod and therefore this pipeline step will be marked as failed. Note the use of fail-fast: false and cf_export - this is how we record test results in order to rollback the canary if they failed. The rollback criteria is then evaluated in the next step:

We will use the same mechanism of result evaluation and rollback for the next quality gate.

The verification itself is done by the test script that is found in tests/it/canarytest.sh - it first waits for the application to return a response within a satisfactory timeout. If the response is not returned - verification fails. (This is similar to how we’re defining the readinessProbe for the canary pod. Both the probe and the verificator script try to hit the same /ping application endpoint. This endpoint is set to have an initial latency of 10 seconds which decreases with each incoming request. The difference here is that the service doesn’t even start sending traffic to the pod until the readinessProbe is satisfied. Once the service becomes available - the verificator does its own checks.) If the response arrives - the script proceeds to running the integration test. This involves reading and writing some actual ornithology data to and from the database. If all goes well - we conclude that the canary is alive and healthy and proceed to the next gate.

Now that our canary grew stronger we can try and expose it to the poisonous winds of production workloads. We do this by attaching a run=canary label to it. This tells the ‘ornithology’ service to route part of the incoming traffic to the canary pod. In our case this will be approximately 10% - as we’re running 9 replicas of the production version and 1 instance for the canary. We then verify that the whole system continues to function as expected while the canary is in fact getting the designated traffic:

If this step also goes well - we can either open some more traffic to canary (by deploying more replicas of the new version or replacing some of the production pods) or just roll out straight to production if we’re satisfied with the results.

Letting the Canary Out

If we passed both gates, we are ready to promote the canary to production use. If any of the previous gates had failed, the pipeline would have stopped and we wouldn’t have reached this step of promoting the canary. For this example let’s assume that the 10% traffic check is a strong enough criteria for release approval. That’s why in the next step we just trigger the Codefresh production pipeline:

This is done using the brand new Codefresh cli which you can read more about here: http://cli.codefresh.io/

The production pipeline doesn’t need to rebuild the application image (remember the CI/CD mantra : build artifacts only once) - it just does the tag replacement trick in the K8s deployment file and triggers a rolling update of production replicas to the new image version.

Stepping Up Your Canary Game

Canary deployments provide tremendous value, but they aren’t that easy to pull off. With all the simplicity there is quite a lot of detail in our tiny example. We haven’t even discussed rolling back the canary if something goes wrong! And then there are the questions of data compatibility, API versioning and inter-service dependencies. You can not cover it all in one blog post. We will do our best to touch upon each of these topics separately in future publications. Another thing to note is that using Kubernetes standard LoadBalancer type service only allows simple round-robin traffic distribution between canary and production instances. That’s why we had to deploy at least 9 replicas of the production version in order to be able to route 10% percent of traffic to the canary. For more advanced traffic splitting one could use a smarter Ingress resource based on Nginx, for example. In further posts we’ll provide an example of how this is done. It’s also worth noting that our example is fully synchronous and blocking - i.e all the canary verifications are executed inside of the pipeline. In a real-life scenario such a pipeline could take quite a while to complete. A better strategy would be introducing a cluster-side listener that would orchestrate canary availability and trigger further Codefresh pipelines when canary quality gates are passed. We’ve started looking into developing such a component to complete this flow.

We do hope that today’s example provides a glimpse of how one can achieve canary bliss by combining Codefresh and Kubernetes. Feel free to send us your feedback, ask questions and raise doubts. Codefresh engineers are here to help!